Most people use idioms in their daily conversations without thinking. But these expressions can seem like utter nonsense if you aren’t a native speaker of that language, so translating idioms can be tricky.

A lot of idioms don’t translate easily across languages. And trying to translate them can have some hilarious results.

You usually need to know the meaning behind the idiom before you can truly understand what it means. But this can pose some interesting problems for people who are working in a different language.

What is an idiom?

Idioms are sayings or expressions with a meaning that differs from the literal meaning of the individual words [definition].

You can see why this would be confusing for someone who doesn’t know the meaning of the phrase.

This is because you can’t get the meaning of an idiom from the expression alone – you need to know the context surrounding it.

Generally idioms offer advice or reflections that can be applied to the situations they’re used in. So, not only are they interesting linguistically, but they offer some great insights to the culture and societies in which they are used.

These expressions can be applied to pretty much every area of life. But the best way to see that is to look at some of the best idioms from our own language.

Here are some common English idioms and their real meanings.

It’s pretty likely you’ve heard someone use these idioms if you’re a native English speaker. But, when you stop to take the phrases literally, it’s easy to see why non-natives could get confused.

Idioms can describe universal experiences. So, are there any universal idioms that are used in every language?

The answer is yes and no.

Some idioms can be applied globally, and have versions of one another. But they don’t use the exact same words.

Others will only make sense in their own culture, and will sound like complete nonsense to any non-native.

Let’s take a look at a few of those ‘universal’ idioms that can be applied to the same situations.

One universal situation that is described by idioms in most languages is a job that is easily done.

In English, you might hear someone say “that’s child’s play”, “that’s a piece of cake”, or “as easy as ABC”. So, even within one language there are multiple idioms to describe this situation.

A French version of this idiom is: ‘c’est un jeu d’enfant’. Literally, this means ‘it is a child’s game’, so is really similar to the first English idiom above.

In Chinese, we have 举手之劳 or jŭs hŏu zhī láo. This can be translated to mean ‘the effort of raising a hand’.

The Germans also use hands in their idiom – ‘das schaffe ich mit links’, meaning ‘I can do that with my left hand’.

The words are not that important when translating idioms such as these. It is the meaning that matters. One can often be substituted with another.

Another situation that has idioms in a lot of different languages is bad weather.

In English, we might say ‘it’s raining cats and dogs’ if we see a storm outside. This means it’s horrible weather, or raining heavily.

French has a similar saying: ‘il fait un temps de chien’. This roughly translates to ‘it’s dog weather’, but means the same as the English idiom above – the weather is foul. However the French are as likely to say ‘il pleut de cordes’, literally, it’s raining ropes.

The Welsh also have an idiom for this situation, but they move away from dogs and cats. ‘Bwrw hen wragedd a ffyn’ translates to mean ‘raining old ladies and walking sticks’ and is commonly used to describe heavy rain.

Even though these idioms are all different, it’s easy to understand the situation they refer to. Most countries have their own versions of similar idioms.

But, translating idioms is harder if you don’t know the surrounding context. Let’s take a closer look at some idioms that don’t translate across linguistic borders quite as easily. 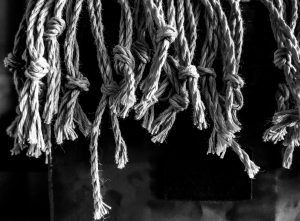 One great French idiom is perfect for describing anger or losing your temper is ‘avoir la moutarde qui monte au nez’. This literally translates to ‘to have mustard up your nose’. It’s easy to see how this could be confusing to a non-native.

Another pretty strange sounding French idiom is: ‘avoir un poil dans la main’. This literally means ‘to have a hair in one’s hand’, but is used to mean someone is being lazy.

A more romantic choice is ‘un coup de foudre’. This literally translates to mean ‘a lightning bolt’, but is actually used to mean love at first sight.

Another language that has some great idioms to consider is German. ‘Eine Extrawurst bekommen’ roughly translates to mean ‘get an extra sausage’. But this idiom means that someone is asking for or getting special treatment.

A fun German idiom is: ‘da steppt der Bär’, which translates to ‘the bear dances there’. This is used if you want to say a party will be great fun.

And ‘Tomaten auf den Augen haben’, literally means to have tomatoes on your eyes. But this is used to describe someone who is being blind to their surroundings.

China is well known for its idioms and wise sayings. They are known as ‘chengyu’ in Mandarin. Translating idioms, or chengyu into other languages is particularly tricky.

‘马马虎虎’ (mǎ mǎ hū hū) literally translates to ‘horse horse tiger tiger’. But this phrase as a whole is used to describe something that is average, or in English “run of the mill”.

Another great Chinese idiom is ‘骑虎难下’ (qí hŭ nán xià) which translates to mean ‘riding a tiger is difficult’. This idiom is used to describe hard situations that cannot be stopped halfway through.

‘民以食为天’ (mín yǐ shí wéi tiān) is another Chinese idiom that can be used in many situations. This literally means ‘people regard food as heaven’, and is used to emphasize the importance of food.

Although Wales is just next door to England, they still have plenty of idioms that don’t translate well to non-natives.

For instance, ‘Rhoi’r ffidil yn y tô’ literally means ‘putting the violin in the roof’, but is an idiom used to describe giving up.

‘Fel cynffon buwch’ translates to mean ‘like a cow’s tail’. This idiom is used when someone is later than everyone else.

And ‘A’i wynt yn ei ddwrn’ translates to mean ‘with the wind in his fist’. You can use this saying to describe someone who is out of breath.

Russian is another great language for fascinating idioms. Let’s start with ‘Остаться с носом’ (astat’sya s nosam). This translates to mean ‘stay/be left with the nose’, but is used to describe someone who was tricked or duped into something.

‘Когда рак на горе свистнет’ (kagda rak na gare svisnit) can be translated to mean ‘when the crawfish on the mountain whistles’. This essentially means something is never going to happen.

Another great one is ‘Дать зуб’ (dat zub) translates to ‘give a tooth’. This idiom means that you are 100% certain about something. You are so sure that you would give your tooth.

Finally, let’s look at some Spanish idioms that sound pretty strange when translated into English.

One great Spanish idiom is ‘Estar en la edad del pavo’, which means ‘being in the turkey age’. This sounds like complete nonsense if you don’t know what it means. But it actually refers to being in your awkward teenage years.

Another Spanish idiom related to age is ‘ser del año de la pera’. This translates to mean ‘being from the year of the pear’, and means to be very old.

‘Estar sin blanca’ literally translates to ‘to be without white’, but this common phrase actually means to be broke or poor.

The trick to translating idioms, of course, is knowing when there is one in front of you. Translate an unknown idiom literally and there’s a good chance you’ll be barking up the wrong tree. But any translator worth his salt will not only be able to recognise these neat little expressions but seamlessly work their meaning into the target language too.

To be able to accurately convey the sense of the idiom is one thing; finding an equivalent phrase in the target language which also reflects the original tone and sentiment presents more of a challenge.

At STAR, our teams work into their native language so that each and every translation benefits from the translator’s inherent understanding of their language and its idiomatic nature. We pride ourselves on finding linguistically elegant solutions to these types of issues

and, as a result, providing translations which hit the nail on the head, every single time.