As my dedicated readership will no doubt know, I want this blog to serve as a resource for anyone out there who suddenly finds themselves needing to buy translation and needs help on where to start.

Over countless years, I’ve watched my husband’s eyes glaze over when I start dropping jargon into stories about my day. So I know that for industry outsiders, translation really isn’t as simple as “language A translated into language B”.

Recently, we’ve been discussing how to get the best results from your translation project, and part of the key to that is to prepare a project brief. A project brief would usually contain information about the audience of a text and what the customer wants to achieve with the text.

For example, a technical manual and a press release will have very different requirements for use of language.

Any translation will do?

The answer to that question entirely depends on what you want to achieve with your translation. If it’s a simple case of needing to understand a document, then sure. Any accurate translation will do.

Yet, if your aim is to drive traffic to your website or to increase engagement on your social media profiles, perhaps there’s more to it than that.

So, on to the main point that I’m trying to make. If you send the same text to different translators, you’ll receive different translations back. Each one will be a faithful rendering of the original, but they will have a different effect on the reader.

To illustrate this point, I’m reposting an oldie, but a goodie – from 2013 to be exact.

My colleague sent the following short passage from a French novel to 5 of my translator colleagues, and asked them for their translations:

Here are the results, in no particular order:

As you can see, and as predicted, no two translations are the same, even though some contain identical elements. Nor are any of them “right” or “wrong”; they’re just stylistically unique (and all perfectly accurate!). Each translator has found a subtly different solution to the same linguistic problems.

The reasoning behind the choice of words was influenced by the instructions they were given. This was a “free” translation with no guidance or restrictions. But let’s consider a couple of the translations in more depth.

The second translation is arguably closest to the original. It keeps the short sentences, the factual descriptions of the pigeon and its actions. To be critical, I would argue that it has the least impact of the five.

The fourth translation takes a less literal approach – it adds information with the “beady” eye of the pigeon, combines sentences to create more of a flow in the text, and creates a far more powerful image in its description of a pigeon that “flutters” into a tower, “there to end its days”.

Each translation has its merits and would fit with a different translation brief. Without any instructions, the results vary wildly and the translator must judge the best style from other factors.

In a way, therein lies the beauty of language and, by extension, translation. When it comes to matters of style, there’s a lovely mutability to the art of translation; it’s a constantly shifting process, depending on any number of factors which influence the lightning decisions being made and remade over and over again in the translator’s brain as it analyses the text.

And of course, it’s also highly individual. Each of the five translators would be able to explain the precise reasoning behind their choice of words, depending on the unique picture conjured in their mind as they were translating.

Personally, I’m not familiar with the original French novel. I couldn’t tell you whether the second or fourth translation is a “better” approximation of the writing style of the author in the rest of the text. It’s hard to judge anything on the short excerpt that we see here, and in a way, this is why the translations are so different. 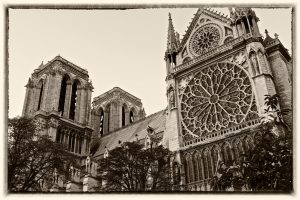 It’s not actually about right or wrong

At a professional level, and in texts involving any degree of stylistic interpretation, we don’t often deal with “right or wrong”; more with shades of equivalence and nuances of meaning. As shown, each of the five translations is accurate and would pass through a second review with no changes.

Unless perhaps, there was a translation brief to follow.

Needless to say, in any commercial translation there are factors such as customer dictionaries and style guides that will all inform translation choices. However, one of the main factors will always be the type of text and its intended audience.

If we assume that this project was a literary translation, then the first, third and fourth translations are all well suited.

If we assume that the intention was actually to create a newspaper article (a slight stretch, but bear with me please…), then the second and fifth translations would be my choices.

Yet however fascinating that might be, these types of differences and the reasoning behind them largely belong in the realm of Translation Theory. Nice to read about in a blog post and to give a little insight into the profession, but less relevant to the modern translation industry.

Customers want to be sure that the translations they receive are optimised for their intended audience. A project brief is the best way to pass this information along.

In fact, it doesn’t need to be a long and arduous undertaking – it would be sufficient to provide a line or two detailing exactly who will be reading the text and what function the text has.

What do you think? Can you see the value in a translation brief?